RIDICULOUSLY FAST SHIPPING! We ship the same day you order. Often within the hour!

IMPORTANT! Scroll down to see which style matches with your specific model Buick.

They’re easy to install and can be removed without causing any damage to your vehicle. Same day ship-outs make our designer door striker covers a no brainer for anyone who wants what they buy right away…

These stainless steel door striker covers are one of the hottest items around. They say it’s the little things that make the biggest difference – and I think this certainly qualifies. It’s not something you see often – but when you open the door – these door striker covers catch the eye.

There are plenty more examples – but these are the kinds of things that make luxury car buyers proud to own something special. These door striker covers are a similar case. When you get in – or when a passenger gets in – they get noticed. Throw a set of these door striker covers into your cart and I’ll have them out to you immediately – because that’s how I do things… 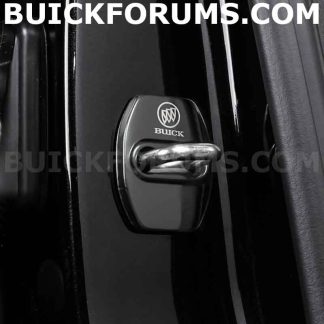