i am now considering just temporarily replacing my HU with an updated OEM since my CD player isn't working and it has no cassette. I was just curious if the 2000-2005 OEM units are all cross-compatible since they have that unique plug-and-play bus in the back. for reference this is the OEM unit I want to get, but the description says its for 2003-2005. 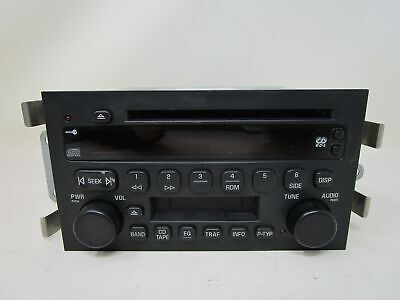 Find many great new & used options and get the best deals for 2003-2005 BUICK LESABRE RADIO CD & CASSETTE PLAYER at the best online prices at eBay! Free shipping for many products!
www.ebay.com

Of course it is fully compatible. The interface in these vehicles is commonly referred to as "Dock and lock". I'm truly sorry that you weren't able to get your Kenwood to work. Perhaps you should go with the Axxess/Metra adaptors next time instead of PAC. Let us know when you're ready to try an aftermarket unit again.

The only issue that you might encounter is unlocking the radio. It may say LOC on the display. If that occurs then you should search this forum for the procedure to unlock it.

The '03-'05 radio requires a command (specifically the Dash Interface Module - DIM) from the serial bus to power on. It also is VIN matched to some modules on the bus and does go LOCKED as soon as the ignition is turned to ON (ACCESSORY can be used for functional testing as the VIN check is not performed). It stays locked until battery power is removed, or is matched with a GM Tech 2 tool.
I've not tried this particular radio in the 2000-2002 car that originally used the big, single knob radio. I suspect there may be no serial bus connection (purple) to the radio in the earlier car. I know the Dock & Lock used a ribbon connection in the earlier body, but changes to actual wires to the Dock & Lock from '03-'05.

There are 3 different face and types for 2000, 2001 and 2003 to 2005 along with part# with different sound source and option in systems. If looking at used matching the current model would possibly be the best route.

Another post on the LOCK display if it comes up to be mindful of.

I have a 2001 LeSabre with the regular Radio/Cassette deck. I'm getting a Radio/Cassette/CD OEM radio and need to know how to remove the dash piece surrounding the radio. Thanks

Still have to unlock it though. 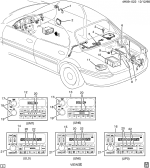