The chrome on the bumper molding on my 2007 Lacrosse is peeling off. I see the molding is easy to order but how do you replace it.

A spot somewhere between the Atlantic and Pacific

There is no such thing as "chrome" moldings on cars anymore. Chrome moldings and other items on cars went by the way-side in early 1970's cars. They are now plastic aluminum coating that appear to be chrome as in the old days on cars. Chrome was difficult to keep as it would pit and rust would form under the chrome finish... that is if it wasn't chromed correctly. I would say that 90% of all moldings are now applied with 3M adhesive or smiler tape.

It appears that it's only 3 press clips hold it in place so plastic trim tools should be all that's needed. Someone else on the forum may have additional info. 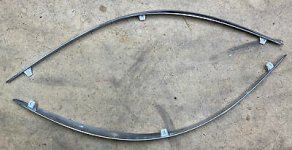