I own a 2007 Lucerne CXL with 201,000 miles on it and by god has it ever been an amazing car. But recently Ive encountered a bit of a power steering "gremlin". I live in Iowa and we've had a week of extremely frigid temps here (lows in the -20's, with high's in the -2's)! And the car preformed beautifully through all of that, until recently, once it warmed up. I started getting your typical power steering mechanical squealing, so I take it into the shop and sure enough they show me where the pump is spraying fluid, some is even getting onto the serpentine belt and it's shooting it up to the underbelly of the hood! I'm told "it's not too serious yet, and they are going to top of the fluid". I say, "okay and thank you". With plans to fix the issue once I get my tax refund. Not 25 minutes later, I loose power steering in the grocery store parking lot and get some emergency warning about "checking battery connection". I'm able to drive the Buick back to the shop (but just barely) before the car gets too close to overheating!!! 'Twas a rather scary drive, I must say.!! I'm told I have the worst luck ever and that my water pump is simultaneously failing/has failed now. I decide to go ahead and have both fixed: the water pump is to be AC Delco and the power steering pump (and all its accoutrements, because there is a new line/house involved, plus some business about draining the old fluid and putting in new fluid) is to be "remanufactured" AC Delco. So we now fast forward to the day I'm to pick up my car and I'm told the water pump has taken just fine, BUT this is the 3rd Power Steering pump they've been thru and the power steering STILL isn't correct!!!?? And indeed it is not, in fact, its WORSE! My car has been given back to me while they scramble to fix and solve the problem and my $1,000.00 bill has been forgiven (that almost never happens?). Any suggestions as to what is going on, or if you've found yourself in a similar situation would be greatly appreciated!
Thank you my fellow Buick Enthusiast

At the mileage things will start to possibly show up, maintenance, driving style and conditions all come to play. Options on the power steering pump is find another manufacturer as no one would know why the others have failed especially without a manufacturers name.

Other option is find a low mileage used one, not sure on GM Part# 15796702 so confirm, a lot of components are on other GM models and years, is it a chance that a used one could fail also yes but so have the new ones. 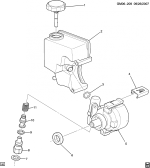