Coefficient of drag and MPG...observation.

Today I had another roadie from Indy to Fort Wayne. I filled up before I hit the highway. I did a little experiment...at various speeds I noted the instant MPGs. What I found was quite interesting....

At 68 mph i set the cruise. I was averaging 24 mpg, ranged from 20-25 given the slight hills and valleys. The same holds true for the rest of these speeds,

Keep in mind this, on my trip up it was about 6 degrees. So don't pay attention to the low MPG numbers. I've seen my car get better as I put more miles on it. I averaged over 27 mpg earlier this week when it was nearly 30 degrees out, at around 75 mph.

That said, I was only gaining 2 mpg on average going 72 vs 79. Again this is not scientific by any means, but I did pay close attention.

The top speed of our GS is 162 mph, with only 270 HP. That is quite impressive. And that leads me to believe that the drag coefficient of this car is really good. I looked it up and it's 0.34, which isn't terrible but not the best, but its overall frontal area makes it pretty good in the drag coefficient dept.

I just wanted to post this...I know there are many variables. I am running on the Pirellis in the winter, aired up a bit high bc it has been so cold they drop on the road when I take it out of my garage.

Just a bored guy stuck in a hotel...having a few drinks.

I've done two 500-mile trips, one in 30F and one in 75F, and I had a difference of close to 5mpgs due to the weather. Also, winter blend vs summer blend makes a difference in the fuel. But what you saw is standard for every vehicle; the faster you go, the lower your mpg will be. Optimum MPG is between 45-55 mph, where everywhere else it drops. 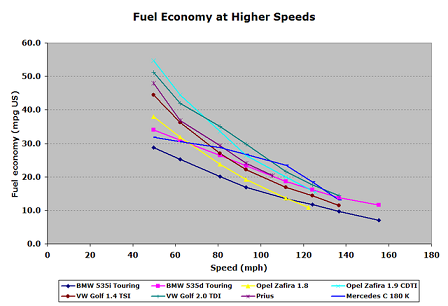 I give you mad props for running Pirellis in the winter. They are like hockey pucks under 45F

I wonder how the 2014's have a drag coefficient of .27 since the body shape is near exactly the same.

Is it because of the lower friction of the engine? Were there any under body panels added to decrease air resistance (under the engine compartment perhaps)?

That's a big difference between the two numbers. Something doesn't jive. Where are you guys finding the specs? I would have thought a modern, tear drop shape like these would be around 0.26 or 0.27. It's been a few years since I had fluid dynamics though...

What are your tire pressures at those temperatures in the single digits?

NormT said:
What are your tire pressures at those temperatures in the single digits?
Click to expand...

cmgww said:
Knowing it's so cold...I keep them a bit over inflated. 39 or so...bc out on the road they actually DROP when it's this cold (single digit temps). When it warms up I will let some air out.
Click to expand...

I'm at 45 psi cold in the summer tops, 41 psi is the max I'll see hot on a 7F day. It usually starts out at 37-38 psi and doesn't really warm up much in single degree temps.I like your methodology and look to your summer results, especially on 20" wheels.

You really shouldn't drive the pirellis in that cold a temp...

NormT said:
I'm at 45 psi cold in the summer tops, 41 psi is the max I'll see hot on a 7F day. It usually starts out at 37-38 psi and doesn't really warm up much in single degree temps.I like your methodology and look to your summer results, especially on 20" wheels.
Click to expand...