So if you have a stamped 230hp engine with a 4 barrel intake and carburetor then what is it‘s horsepower?

JGT said:
So if you have a stamped 230hp engine with a 4 barrel intake and carburetor then what is it‘s horsepower?
Click to expand...

What makes the compression higher?

JGT said:
What makes the compression higher?
Click to expand...

I see these questions all the time. Someone wants to know how much horse power they have, sometimes after they added x, y, and z to the engine. Prior to the early 70's, engines were rated in a different way than they are today. Understanding Gross Versus Net Horsepower Ratings > Ate Up With Motor

Those HP figures were often exaggerated and manipulated for marketing purposes. A perfect example is the 1970 Chevy SS 454 LS6 engine rated at 450 HP. The 1970 Buick GS455 Stage 1 was rated at 360 HP. Both cars produced virtually the same 1/4 trap speed performance, about 101-102 MPH. Trap speed tells you how much HP the engine is actually producing. So how could one engine be making 90 HP more? It can't be, that's the answer. Bottom line, if you want to know how much HP your engine is producing, put it on a Chassis dyno. That will give you rear wheel HP, a much better predictor of real world performance. Or, take it to the track and run it down the 1/4 mile. If you want to brag about how much HP your engine is making, nothing states that better than a time slip. Here's a chart for rear wheel HP,

If you run your car at the track, note the E.T, and trap speed. 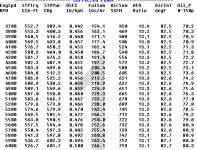 JGT said:
What makes the compression higher?
Click to expand...

Smaller combustion chambers, and smaller piston dish/valve reliefs. Also, stock pistons tops are actually down in the hole .040" to as much as .090" at TDC. When rebuilding an engine, it pays to strive for zero deck. Zero deck is when the piston top is even with the block deck at TDC. More efficiency and power and resistance to detonation are the result. Here's a static compression calculation for my engine, 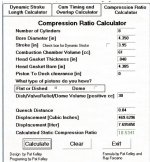 So basically in 1968 they made a 350 engine with 2 different cylinder heads and pistons correct?

JGT said:
So basically in 1968 they made a 350 engine with 2 different cylinder heads and pistons correct?
Click to expand...

No, cylinder heads were the same. Piston dish volume was different. One engine was rated at 9:1 compression, and the other was 10.25:1. I can tell you even that was fudged. When taken apart and measured, the compression was less.