Took a 700 mi trip with our '18 Pref TourX this past weekend; 4 adults & a fully loaded cargo area.
At a rest stop, i opened the hood to find the dipstick too hot to hold after 5-10 minutes sitting, turned off with the hood closed - never felt this before in decades of owning more than a couple dozen vehicles. The temp gauge never read above the 1/2 way mark.
At our destination, the engine area was till so hot after sitting 1/2 hour that i could barely hold the dipstick without some insulation between my fingers & the handle. Starting up the engine, even after an hour of sitting (with the hood closed), the temp gauge immediately read at at least the 1/4 mark. It would have to sit much longer (probably 2 hr or more) for the gauge to read at the lowest mark when starting up.
On initial start up, the gauge goes thru the check from lowest to highest mark before settling on the "actual" reading, so i don't suspect a problem with the gauge itself. There's no fluctuation while driving, though, after the gauge goes from low to the 1/2 mark within just a minute or so of starting. It just stays at that 1/2 way mark all the time after warming up.
I'm not surprised to have an analog gauge that's not very accurate, but this a little worrying as far as how much i can trust this system to let me know if things start getting too hot at some point in the future, or when someone who's not paying attention is driving the car.
Anybody here have a temp gauge that works more reliably than this, showing at least some fluctuations under varying driving conditions after it reaches what's displayed as a mid-range temperature?
Should i be concerned at how hot this thing is getting (and staying, even after sitting for 1/2 hour) under the hood?

Sounds normal to me. My temp gauge always hangs out around 1/2. Using a bluetooth OBD2 dongle and the "Torque Pro" app on my phone I can display coolant, oil, and trans temps. Coolant always hangs out betweeb 202-212F, even when towing. Oil is about the same, and trans varies, but on long drives gets up near the other 2.

With everything under the hood >200F, it's no surprise some things can't be touched. I've done a lot of soakback testing for EFI calibration, and generally things reach peak temp 20-40 minutes after shutdown. Except, if course, items like exhaust manifolds, coolant, etc, which begin cooling down immediately when the engine stops running.

Normal. The dipstick tube is directly behind the turbo so it is not surprising that it gets that hot. There is literally a hot symbol on the dipstick handle for this exact reason.

I know temps continue to climb once the cooling system becomes inactive, it's just that 40 minutes later surprises me.

adam728 said:
With everything under the hood >200F, it's no surprise some things can't be touched.
Click to expand...

Never found this to be the case touching the oil dipstick handle 15 min after shutting down on any other vehicle i've owned or worked on.

That white triangle on the dipstick is a "hot symbol"? I thought it was an arrow. When I first got this car and went to check the oil, the dipstick was not immediately visible since the handle is mostly black. Most other cars have bright yellow or orange handles on dipsticks to make them easily visible.

The temp gauge is not an Indicator is temp in real time. It's an indicator of cold normal and hot. It's programmed to be in the middle all the time. I can tell you the engine temp can change probably in the range of 40 degrees easy before that needle will move from the center. If it's not programmed that way, lots of people look at the needle over the half way point and freak out. Remember ford had the N O R M A L range on their gauges for a long time? Cars like the tempo and escort could easily hit the 3/4 mark on the gauge and people would think it's over heating.

So In these cars, of that needle ever starts to creep to the right past the middle, something is very wrong.

wagonlover56 said:
That white triangle on the dipstick is a "hot symbol"? I thought it was an arrow. When I first got this car and went to check the oil, the dipstick was not immediately visible since the handle is mostly black. Most other cars have bright yellow or orange handles on dipsticks to make them easily visible.
Click to expand... 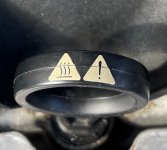 The left triangle is the hot symbol, the right is caution.

As dead solid as it stays at center I've always said if that temp gauge ever moves off center in either direction I'm pulling over immediately, shutting down the car, and calling Roadside Assistance.

My VW's temp gauge was the same. Totally fake, really no better than a warning light.

Everything is this way and has been for some time. It's because people can't be bothered with reading the manual or understanding what's normal. They started temp gauge regulation in the early 90s....another one, GM did this on some 3rd gen V6 camaros and some rangers, the oil pressure gauge isn't a gauge...it has an on off style sender. The needle either shows normal pressure or no pressure and nothing in between lol.

The 94-96 Caprice had a dummy output for the engine oil pressure indicator. It could have been swapped for a correct/actual model which was assigned to the Police 9c1 package.
Where do you buy accessories for your Buick? Right here in the forum store! --> [CLICK HERE] <--
Looking to update and upgrade your Buick luxury automobile? Look no further than right here in our own forum store - where orders are shipped immediately!

PrincipalDan said:
As dead solid as it stays at center I've always said if that temp gauge ever moves off center in either direction I'm pulling over immediately, shutting down the car, and calling Roadside Assistance.

It's an idiot gauge to the extreme. (Other cars I've owned it would move at least a little, the Buick's rises from cold to middle and then stays there with a tenacity that a bulldog with a bone would appreciate.)
Click to expand...

wagonlover56 said:
That white triangle on the dipstick is a "hot symbol"? I thought it was an arrow. When I first got this car and went to check the oil, the dipstick was not immediately visible since the handle is mostly black. Most other cars have bright yellow or orange handles on dipsticks to make them easily visible.
Click to expand...

I thought it was an arrow too..

On the OP's query - sounds 'normal' to me. Relative location of turbo and dipstick (noted by other poster, thanks) seems to be a consideration

autocomman said:
The temp gauge is not an Indicator is temp in real time. It's an indicator of cold normal and hot. It's programmed to be in the middle all the time.
Click to expand...

Is this true of all the replacement gauges/clusters options, including the GS, as well?
If so, as far as we know, there's no clean way to get a real-time gauge (just the gauge, not a 3rd party reprogrammed cluster package) to replace the idiot gauge?
Can a separate gauge be wired off the same senor, so that the sensor feeds both gauges?

I didn't know there were laws on this. Who started what regulations? Do you have a link or reference?

They aren't laws, when I say regulation I mean the gauge was regulated to stay in the middle under normal operating conditions which could have a swing of 30 degrees easily. Say you have a thermostat that's a 195. Electric fan switch comes on at 225. This is the case for the C4 Corvette. If your gauge hot reading is 250...lots of people are gonna look at that gauge going up to 3/4 where 225 deg would be and get uncomfortable. So manufactures started to put circuitry in there to keep the gauge in the middle unless it actually started to overheat. This is how everything operates now, at least most cars. I can't speak for every temp gauge, but this is pretty standard now.
______________________________

1. Don’t forget that the Dip Stick enters through the Head, not through a separate dipstick tube. That is why the dipstick handle stays hot for so long.

2. The temp gauge is a Go-No Go gauge. When in the normal temperature range, ITV does not move. It only moves if it starts to overheat. Reason manufacturers went to that style gauge is because people would see their gauge start to go up, and they would think the engine was starting to overheat.
First started to notice this on cars about 20 or 25 years ago.

Thanks - this is in line with what I thought to be the case. Another case of reducing/filtering real info that isn't understood by "the masses"

The only "real" info about how the temp gauges work would be the designs and schematics that prove the system was designed to work that way.