The fuel pressure measured at the fuel rail is exactly what each fuel injector sees. Think of the inner wall of a balloon ... every bit of the balloon feels the same pressure exerted as a pressure gauge with a hose inserted into the balloon.

They say that, in a closed system, the pressure is the same throughout. Every part of the fuel injected system has the same pressure up to the Fuel Pressure Regulator. The FPR has a spring loaded diaphragm that requires pressure to get past. So the return line has less pressure (close to zero).

The fuel filter has little back pressure compared to the flow rate ... so there is little pressure drop across it.

To summarize, the fuel pressure is highest between the fuel pump and the fuel filter. It is slightly lower between the filter and the FPR, and lowest in the return line. Although the injectors are relieving some pressure in the fuel rail, it is being replenished by the fuel supply line and regulated by the FPR. It is essentially a multi-part closed system.

Great answer, I had replaced the pump late last year along with pressure regulator and filter. Pressure engine off was 39, leak down for a half hour was 37. Engine running pressure was 33 with fuel pressure regulator removal going to 42. All seems gretat except the running engine number of 33, seems a bit low. Thought maybe it could be injector related. Fuel filter had never been changed in 30 years and the funny thing is there was only a slight change after changing but it was better.

Did you change the filter sock at the bottom of the fuel pump? I can think of nothing else to cause low running pressure with new fuel pump and new FPR. A remote cause could be too much vacuum (?) or less than 12 volts at the fuel pump.

Also, the Buick service manual says that the inline fuel filter is a "lifetime" service item. Maybe because the filter sock catches most of the stuff. Yeah, that's it. 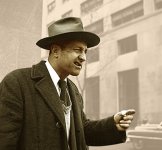 avtechwx3 said:
Great answer, I had replaced the pump late last year along with pressure regulator and filter. Pressure engine off was 39, leak down for a half hour was 37. Engine running pressure was 33 with fuel pressure regulator removal going to 42. All seems gretat except the running engine number of 33, seems a bit low. Thought maybe it could be injector related. Fuel filter had never been changed in 30 years and the funny thing is there was only a slight change after changing but it was better.
Click to expand...

check your gauge, your car shouldnt be maintaining that much pressure after an hour, that little drop is way too little
Also the aspirator on the pump im pretty sure is the next thing to check if not gauge
Where do you buy accessories for your Buick? Right here in the forum store! --> [CLICK HERE] <--
Looking to update and upgrade your Buick luxury automobile? Look no further than right here in our own forum store - where orders are shipped immediately!

So Yes, I changed the pump, the strainer, the sending unit, the tank locking ring the fuel pressure regulator, and fuel filter.

The pump was showing 33 engine running but it wasn't warmed up at all and that day was not real cold but chilly, not sure if that is a factor. So engine was cold, I had just started it. The pressure should be between 38 and 42 as I understand it. Now that its warmed up outside, I'll check it again.

Only fuel injectors are now original. I want to do them sooner or later, probably later since I don't think its that big of a deal to get the fuel rail off of these. I think shops charge a lot to do them like close to 100 per injector with their markup and I would guess 3 hours labor? So that would be around 750 to 900. I could do it for about 250 price of injectors new.

New Fuel Injector is around $80 per injector

Or a rebuilt one for $36 per injector

Thanks for asking, if you like at my other post, I was having a problem with the wiring harness which is now solved. I checked fuel pressure first and just had some questions but everything is good. My gauge did show 33 psi engine running and not warmed up, could also be air in the gauge.

I have fount that fuel pressure test gauges can vary as much as 10psi new out of the box. So I would guess that's your problem. I use a pro OTC fuel pressure set that is very accurate but most don't need that. If you car is running good on what the gauge says then use that as a benchmark. If it goes lower or higher then investigate. Also hot and cold fuel, vacuum, voltage all can make normal pressure vary