This thread will show the installation of the DRL/LED turn signals, shown in this link. Shipping from China took 1 week to the Milwaukee metro area in SE WI. Some drilling is required with this project. 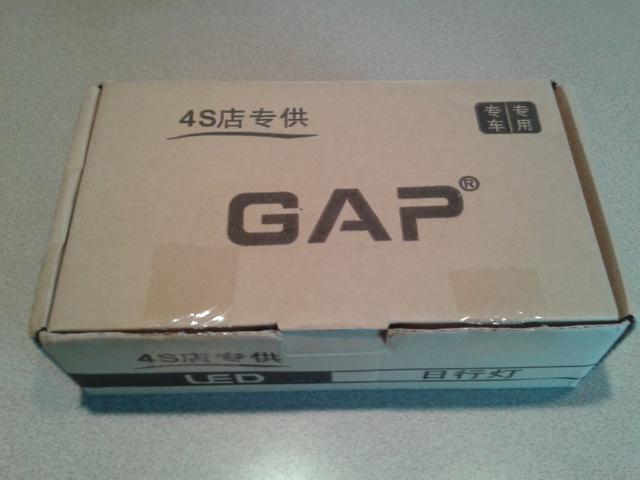 Everything out, the lights are covered in protective blue plastic 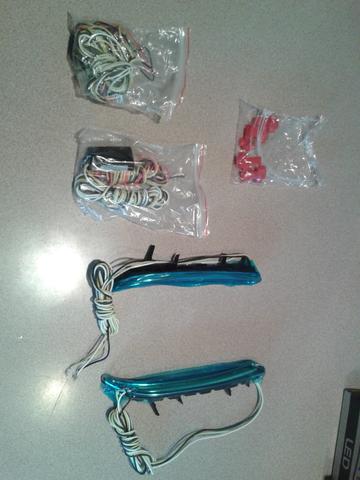 Boy, this sure helps. Luckily my phone is able to translate text, so I was able to decipher some, but it didn't help much. 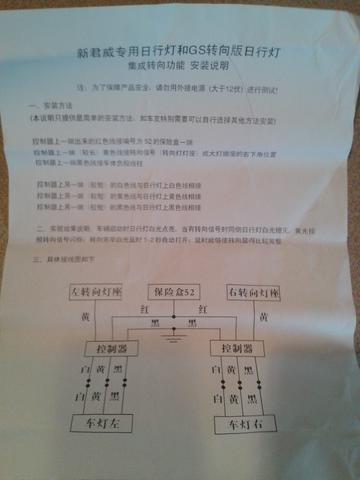 You can see the quality of the lights in this picture. The chrome bezel around the light is held on by double-sided tape. I had to press and hold the bezel to make sure they would stay. I may remove them later and paint them the flat silver that is around the air intake "fangs" so they would match. 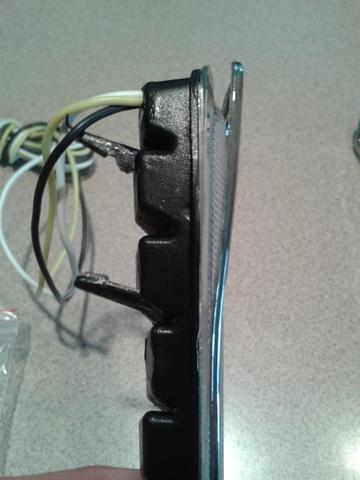 The wires coming out of the light. 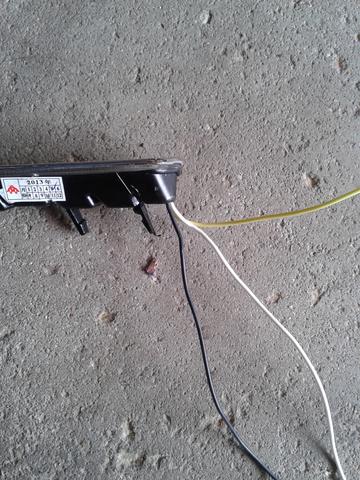 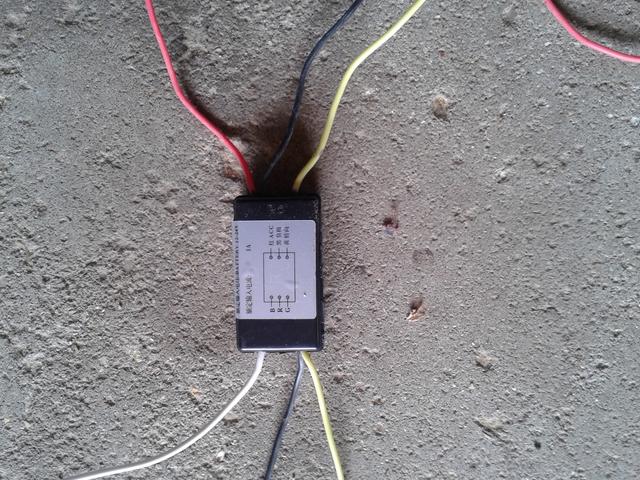 1) Place the front end of the car up on jack stands. Turn the wheel so you have access to the wheel well which you are working on. There are 3 T-15 torx screws that need to be removed to have access to behind the bumper. 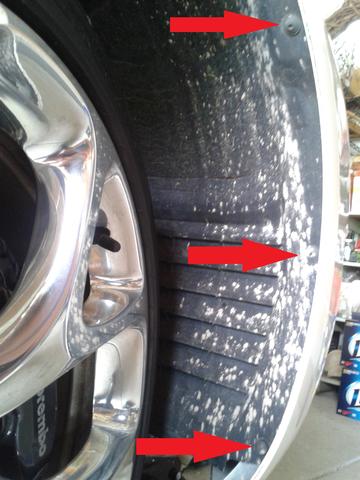 2) Pushing the wheel well aside, you now have access to the tabs of the plastic fake vent. These tabs were EXTREMELY hard to move (you are supposed to squeeze the top two and bottom two together, and push out), so I ended up breaking the top three off and removing the vent. I figured if I ever want to put it back it, I can glue it back in/get a replacement. 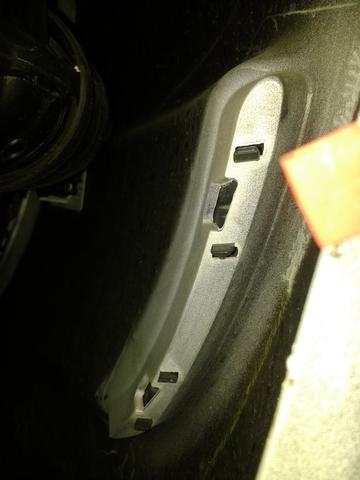 3) Remove the plastic vent, and clean the area. 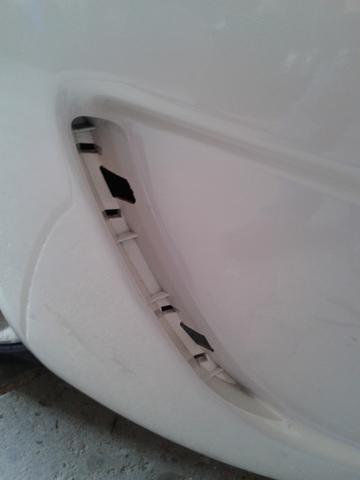 4) Using a 3/16" drill bit, drill a hole at the top of the indent where the black plastic vent used to be. This is where you will feed the wires through. 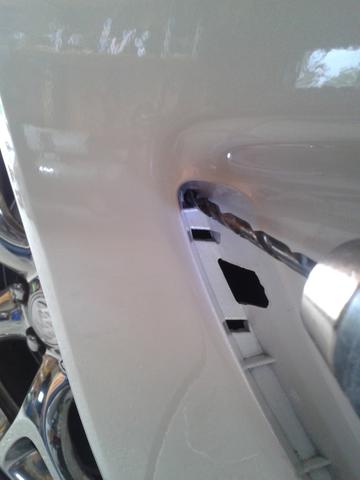 5) Install the light. The light will not seat completely in the indent. Push it is as far as possible. Use hot glue on all four tabs, and on the hole where the wires came through. This will prevent it from falling out.

6) Drop the white, yellow, and black wires down into the engine bay from the black box. I snaked mine along the front of the frame next to the intercooler. I wanted to keep them as far out of sight as possible. I used hot glue to mount the black box to the frame, out of sight, or you can use double-sided tape.

7) Connect the white, yellow, and black wires from the light to the black box. Any extra wiring I bundled up, zip tied, and duct taped it to the inside of the bumper. Reinstall the torx screws in the wheel well.

NOTE: The next two steps are only if you want the fog lamps to flash yellow when the turn signal is activated; I ended up not doing it because of personal preference.

8) Remove the wiring going to the headlamp. Pull up on the red piece surrounding the harness, and pull the harness out. 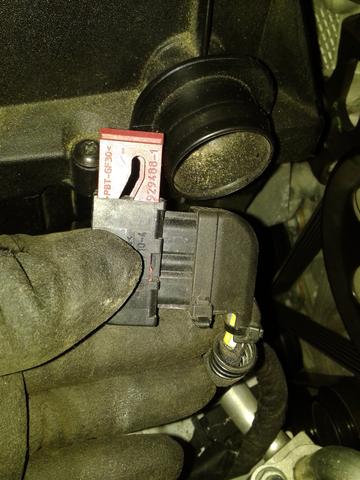 9) Cut open the tubing to expose the wires leading to the headlamp. The yellow wire is the turn signal wire, which we will be tapping into. Use the supplied wire tap (or I recommend actually cutting and splicing into the wire using solder, much more secure) to tap the yellow wire from the red-black-yellow group from the black box. Retape the wire tubing back up with electrical wire. 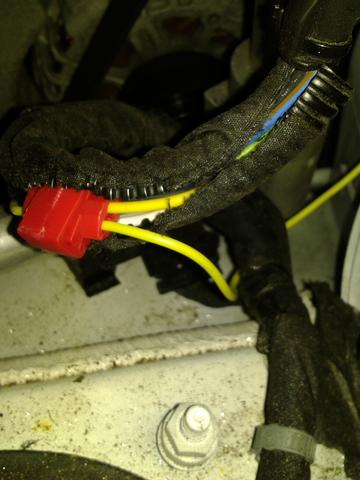 10) Open the fuse box, which is located next to the battery in the right-hand side of the engine bay. We will be tapping into fuse 52 (5 amp fuse). Attach the red ACC wire into fuse slot 52. 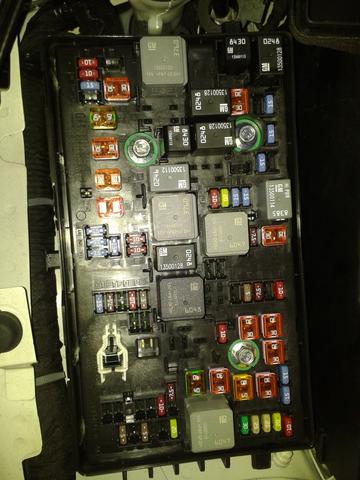 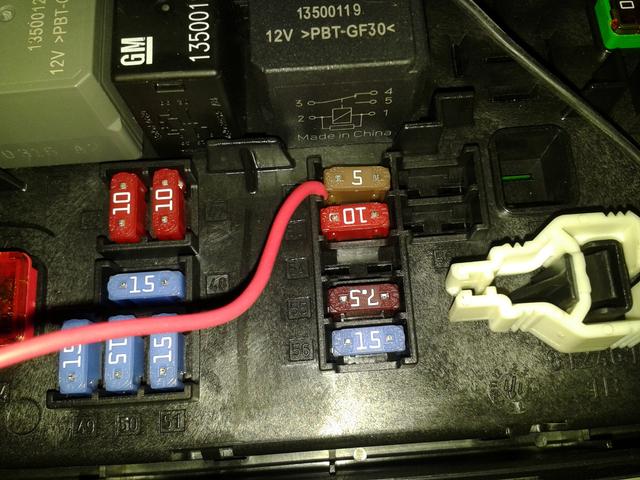 11) Find any bolt that is attached to the frame, and attach the black wire to it. This is the ground. This picture shows me just testing the setup to ensure ground was made, I secured it correctly later on. 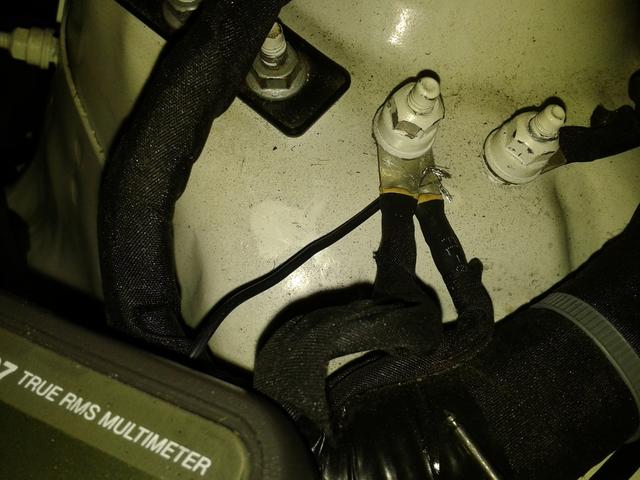 12) Clean up the wires in your engine bay. Here is an example of my engine bay midway through the install. I have absolutely NO wires showing, everything is hidden underneath the wire tubing connected to the frame and covered in black electrical tape to hide the colors. 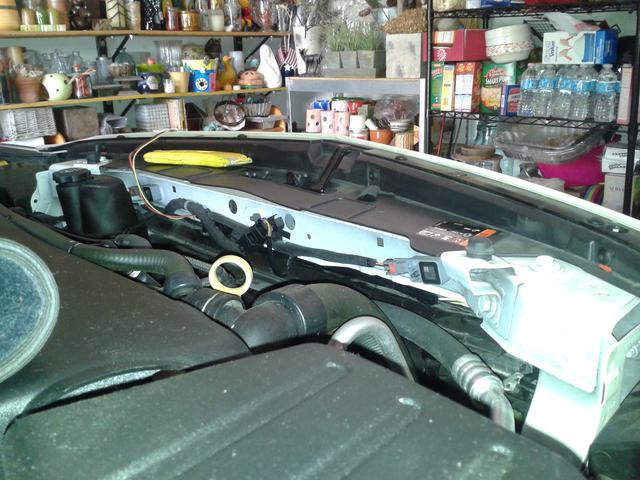 Below are pictures of the final product
DRLs low, HIDs on 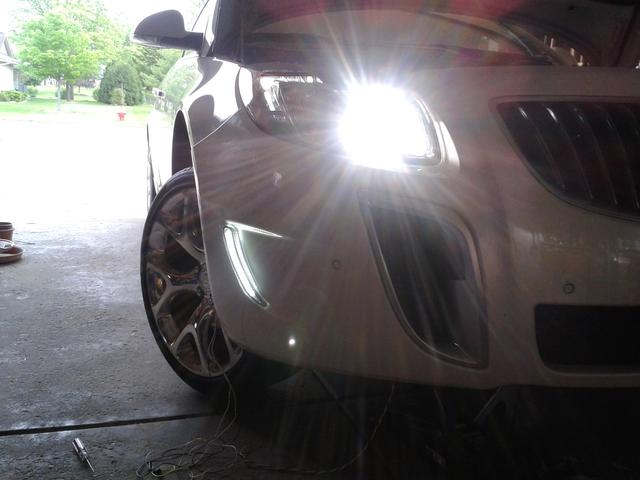 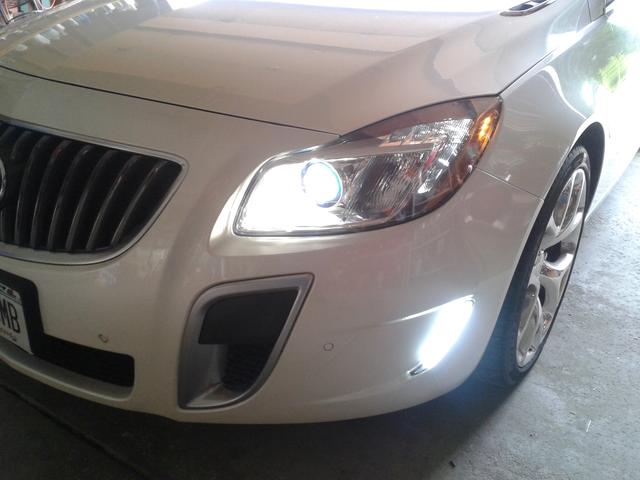 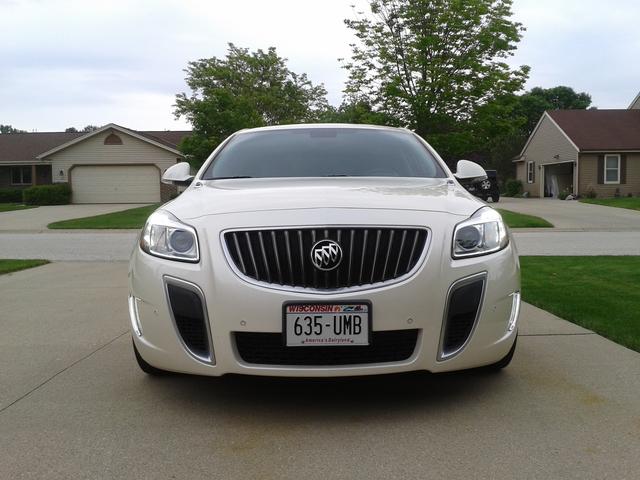 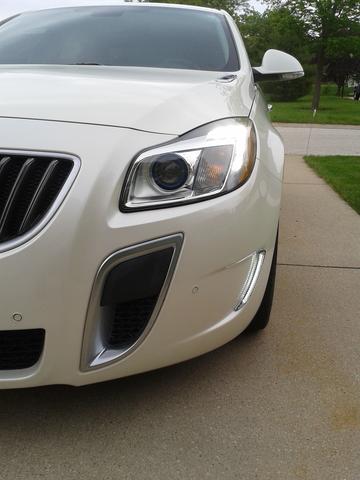 DRLs high, HIDs off in garage 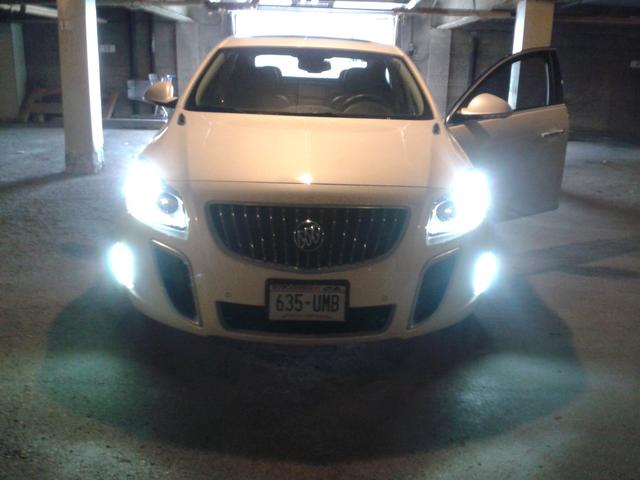 DRLs low, HIDs on in garage 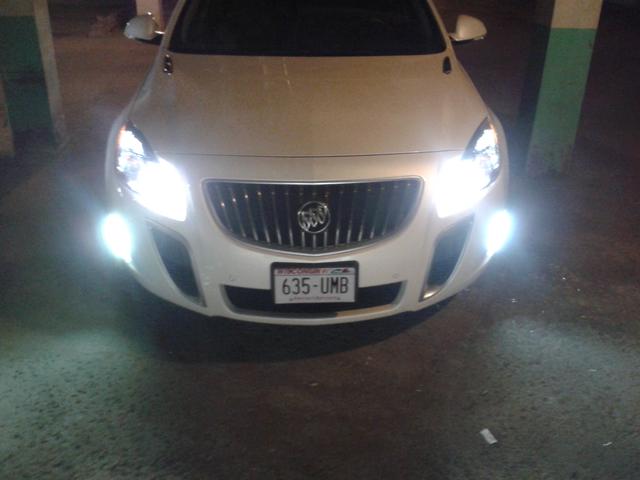 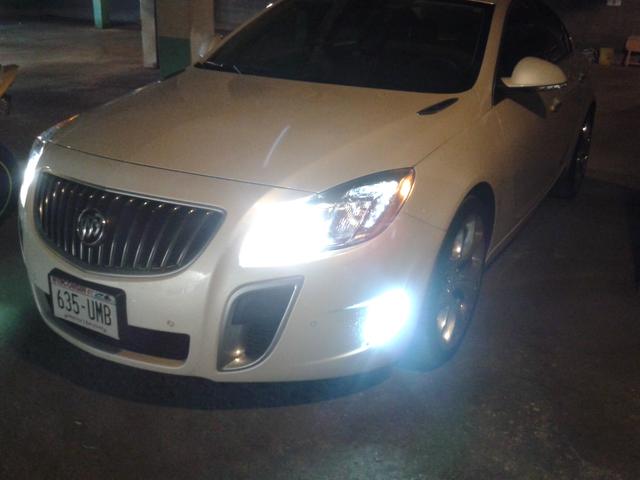 Here are two pictures of the yellow. Once again, I opted out of this, I did not want three turn signals (mirrors, headlamp, and fogs). 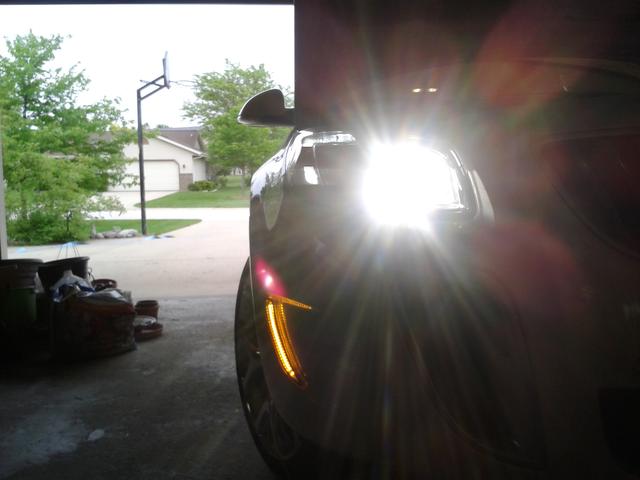 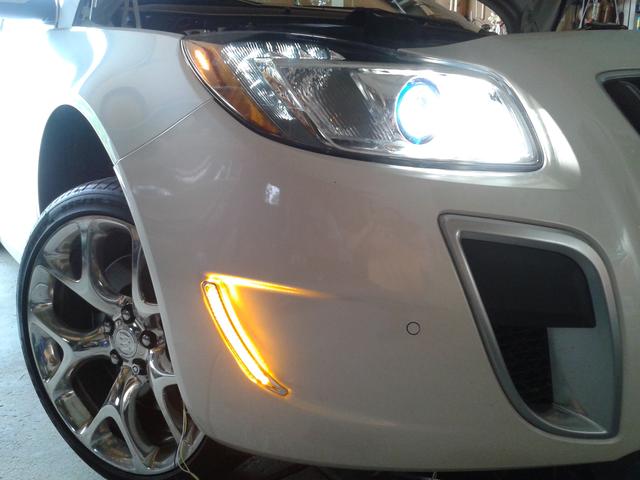 Final Thoughts
The LED color is almost EXACTLY like the color of the DRL LEDs, which is very nice. The fitment of the lights inside the indents is not exact, they may sit a little bit out, but it is not very noticeable. I will more than likely repaint the chrome bezels of the light to match the flat silver of the air intakes. Overall I am very happy with the turnout, I think they look great.

I figured since there was one sheet of paper in all Chinese, a detailed English write up was needed I ordered the ebay kit, I linked it in the first post

Thanks and it's fun being the guinea pig with projects.

With that little notch cut into the bumper on the inboard side of the vent vs the backside It's almost like they meant to put LED strips there at some time. The opening seems perfectly positioned for a small harness / connector.

ImminentFailure said:
With that little notch cut into the bumper on the inboard side of the vent vs the backside It's almost like they meant to put LED strips there at some time. The opening seems perfectly positioned for a small harness / connector.

Thanks! And I totally understand, that notch is where I drilled the hole for the wires, and I had thought that it was almost placed there on purpose.

ImminentFailure said:
With that little notch cut into the bumper on the inboard side of the vent vs the backside It's almost like they meant to put LED strips there at some time. The opening seems perfectly positioned for a small harness / connector.

Especially the way the light reflects off the horizontal crease at the top. My Verano is jealous. Very nice write up.

looks great thanks have to order myself a set


VehicleCityGS said:
Great write up! And they looks awesome! One question, is hot glue the recommended way of install or the best method you found?
Click to expand...

Honestly, hot glue or silicone has always been my go-to for the most permanent non-permanent solutions (silicone more than hot glue), but I did not have any silicone on hand during the install. I may go back and take the hot glue off and replace it with silicone, but for now the hot glue should hold up just fine. I used high temperature glue, and with a melting point of 380°F, it should be fine situated where it is.

A little hard to tell from the pics, is there two black boxes or just one?

Did you have to remove anything from the engine bay to feed the wires?

Thanks for posting the details.

Looks Great! Nice write up too!

OP, could you post a closeup picture of the installation without the lights turned on in the daylight?