When I first bought my GS455 Stage1 back in October of 1999, it had a rebuilt (.030 over 455) with stock iron heads and intake manifold. With headers, and a mild cam, the heavy car (4200lbs) went a best of 13.22 @ 101 MPH. Wanting to improve the performance of the car, I purchased a set of TA Performance aluminum Stage1 Street Eliminator heads, and had Greg Gessler port them to his level2 package. www.gesslerheadporting.com My iron headed motor had about 9.4:1 compression, and Greg milled .040 off the heads so that my compression with the aluminum heads would be a full number higher, 10.4:1 (59cc chambers). The new heads flowed 313CFM intake, and 225 CFM exhaust at .550 lift. Bought a set of roller rockers. With the addition of the heads alone, and an Edelbrock Performer aluminum intake, my car went mid 12's at 107 MPH. I then added a TA Performance SP1 single plane intake along with an AED 1000 HO carburetor (Double pumper like a Holley HP carb). The car went a best of 12.11 @ 111.98 MPH. Along the way, I replaced the rear with a more durable 8.5 10 bolt with Moser and Eaton parts and 3.73's. I also added No Hop bars and an HR Parts and Stuff rear sway bar for Drag Racing. The car ran consistent mid to low 12's at 110 MPH + depending on the conditions.

What I really wanted was a mid 11 second car that I could drive anywhere without worry. I had also added a Gear Vendors Overdrive unit to my Switch Pitch 400 Transmission. It brought the 3.73's down to 2.91 for better highway manners. The one part of my combination that I had not changed was the camshaft. The KB118 cam that I was using, was meant for an iron headed motor. It had a lot more exhaust duration to crutch the poorer flowing iron head, and a wider lobe center that made a lot of vacuum, but had lower top end power. With my new aluminum heads, this cam was a mismatch to the rest of my combination. I needed a better cam to take advantage of my vastly better heads, and better flowing intake and carburetor. The problem I faced was my pistons (forged Speed Pro) did not have valve reliefs. Because my heads were milled, and I only had .035 deck height, I would be limited in duration and lift numbers if I wanted to avoid piston to valve interference. I had 2 choices. I could pull my current short block apart, and have my pistons notched, or I could build another short block with the right pistons from the get go. I decided on option 2.

About the same time, TA Performance announced that they were going to look into marketing a new hydraulic roller cam meant for street car engines. The lift and duration numbers would be moderate for a roller. No crazy spring pressures or lifter valley reinforcements would be required. This sounded exactly like what I needed. The only downside was the cost, about 1000.00 for the roller lifters, cam, grind, and bumper. Cost wasn't an issue for me, so I called TA Performance. Due to typical marketing and production delays, it took about a year to get my hands on one of these cam packages. I had a roller cam ground to 234*/247* on a 113 lobe center with .584 lift. I contacted Jim Weise of Trishield Performance to build me a short block for my roller cam.
www.trishieldperformance.com

Jim has developed a 470 cubic inch short block package for big block Buick engines. It uses custom Diamond Forged Racing pistons, and the Big Block Chevy Eagle H beam rods. Offset grinding of the crank produces a slight stroke increase (3.90 stock to 3.95) Combined with a .375 over bore to 4.350, you get 470 CID. I also decided to send Jim my aluminum heads, SP-1intake, carburetor, a spare distributor, and water pump. Jim disassembled my heads and had them ported some more. He port matched my intake and did some work in the plenum. He assembled everything and dyno'd the engine. I had given Jim permission to test 3 different cams(the last being the roller) in my completed engine. I did this in the interest of providing more information for guys who were planning an engine like mine, and to see what this new roller cam deal was worth. The waiting and the cost was well worth it. On the dynamometer, my engine produced a best pull of 608 HP, and 595 ft. lbs of torque. This engine should easily put my car into the 11's. It might even get me kicked off the track for no roll bar.

Here are the relevant threads on www.V8Buick. You'll have to join (free) to see the pictures. There will be more information, pictures, and video to come in the next week or so. 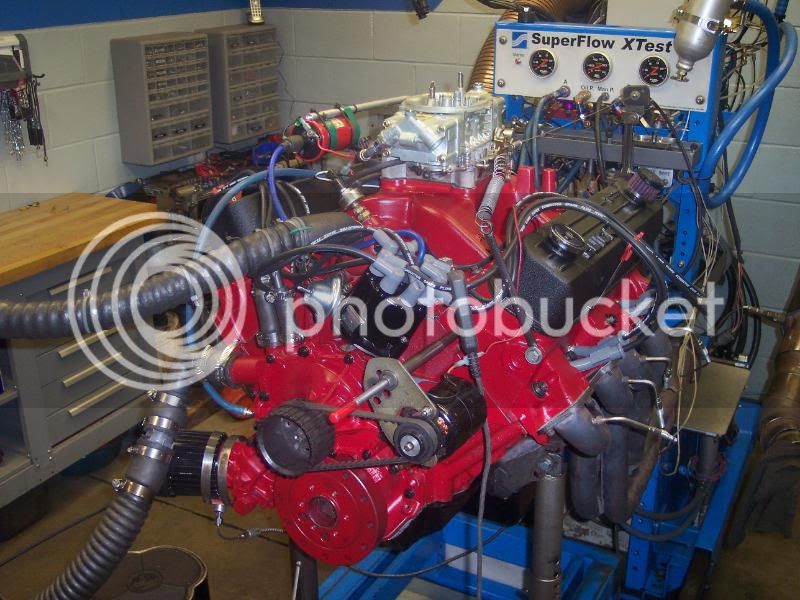 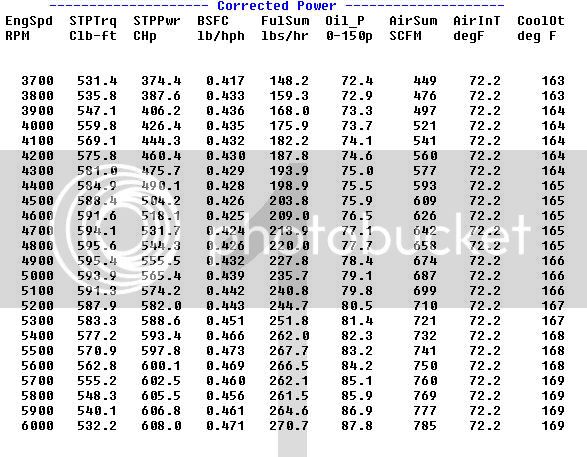