no 4th gear and EVAP issues

My dad got a free LeSabre I have be throwing parts at it and it's beginning to run like the day it left the show room floor. I want to get over drive working again. I learn that the 4th gear shaft over time strip off the shaft and not the fun kind of stripping. I want to go in and replace the 4th gear shaft. is the input sun gear damage when still happens. I don't mind scratches or if just pull the old shaft out and pop a new one in button up the car fill with new fluid and away we go!

On to the EVAP is there a part you guys are always replacing for the evap system I got a new gas cap on the car. (ok where is the sticky posts on common issues)

What year is the vehicle.

is a 2002 think the trim level is Custom

Sorry can't say it's a single EVAP part, guessing the EVAP purge valve seems to be the one that everyone replaces but no guarantee it's what wrong. A smoke machine or professional shop may be something to consider on this. Hoses or components can cause the code so it's not a single problem part code. 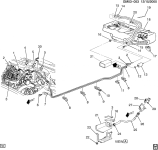 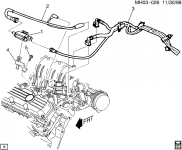 How many miles on it?
Is the thermostat bringing it up to temperature? That would be a 190 or 195 stat IIRC.
Do you have the digital readout for the temps or an analog gauge? An engine too
cool will prevent either 4th gear or lockup torque converter, I am not sure which.

Do you know anything about how the car was driven by previous owner or owners?
HotZ28 and others may know of the 4th gear splines failed in cars driven gently
by the stereotype Buick owner of the day or did they fail in cars driven more "aggressively"
by those who enjoyed their ride's power?

I'm asking because I think there may be more diagnosis to be done before diving
into a 4th gear part replacement. I believe there are some things that can keep
the computer from allowing the transmission to shift into 4th or maybe it's to
lockup the torque converter clutch. Operating too cold is one. And I'm wondering
if there's an evap problem that may cause the computer to block the upshift.

The advice I've read is that the replacement is a deep dive into the transmission
repair. The suggestions are that if a car with high mileage needs the shaft replaced,
it's best to do a full rebuild of the transmission because of all that has to be removed
to get to that part. If yours has failed early, maybe there's something else going on.

My thinking is that it needs to be driven with a transmission specialist and a computer
attached to see exactly what's happening inside the transmission. Might save you
much more money than the diagnostic cost.

I am asking for experts to dive in here because I don't know. But I had the impression
the failures in the trans 4th gear was occuring in Bonnevilles with or without the
supercharger and more power and a much higher tendency to use the power of the
3800 engine than the typical leSabre owner in the 2000's.

If there's an evap check to prevent failures, I'd say a purge valve, right up there on the
front of the upper intake manifold AND checking the tubing carrying the vacuum where it makes
the U turn in a rubber tube that ages and cracks with the heat. I put shrink wrap on my
tubing at the U when it developed a crack and that was enough to seal it so I never followed
through on the part replacement. My purge valve was doing something strange in terms
of sticking partly open or something and giving a P code. I think I even wasted time
and money on replacing the vent valve that's under the car near the carbon cannister.
Wasn't the problem. My Cruze is on it's 3rd purge valve at 80 K miles. Dealer considers
them a throwaway problem. Sometimes they just become noisy and click on the newer
cars.

I replace the temostate with a new did a full tune up on the engine. The car has 350k on the clock I just want to see if i can get 4th to work for the giggles. I want to rebuild it or replace it with a used one maybe from a 04 car.

I'll try the purge valve and pop a new one on and see what happens.

there was a Cruze work on with the noisy purge valve, check the system. It build and held vacuum when it was holding vacuum it shut up. I told the customer if we replace it. the new valve may start making noise, so we left it be the reason is gets nosiy is the engine vacuum the computer duty cicle it like how a fuel injector works. the nosie is the valve opening and closing if you listen to a engine running. the 2000 to 06 Nissan Sentra has noisy fuel injectors and you can hear them working.
Share:
Facebook Twitter Reddit Pinterest Tumblr WhatsApp Email Share Link