Rescuing a 2007 Lucerne CXS with a Northstar

You've done an impressive amount of work here—well above my pay grade. I admire your perseverance in tracking down all those gremlins. Your mother-in-law is fortunate you are willing and able to do all that for her.

Long week at work this week. But got out to the car tonight and made MAJOR progress. Kind of funny because I feel like I should have seen this one coming.

Can you see it?

Look close at the open fuse spot below the two 10a fuses in the middle of the pic. That is the F21 fuse which my code list led me to based off of a handful of other accounts of the same thing. The first time I battled all of this, I had pulled and replaced that fuse, reset the main harness, and it cleaned up. On a whim I took a close look at the fuse box today and found the above, the left side of the fuse circuit spring arms were splayed wide open. The fuse was losing contact intermittently causing the issues. Then it donned on me.

When I first looked at the car, someone had been doing some severe shade tree diagnosing by cutting one of the wiring harness power feed wires for the fuel injectors (I believe they're siamesed) and via pin hotwired the power feed for the injectors. So they put a teminal pin on the wire and shoved it into a KOEO power feed. THAT PARTICULAR FUSE. It makes absolute sense now.

HOWEVER..........last time the car was hesitating to go into 2nd gear and the 2nd drive it popped a MIL. Same thing tonight.......ECM says P0700 which is a generic "TCM requested MIL" code. Thankfully, I had my laptop and VCX Nano with me. So out with Tech2Win (did I mention this is worth it's weight in gold yet?) and I got the following: 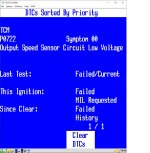 It's a P0722 as seen above. The weird part is that the Speedometer didn't work on the first drive today (I made 4 short drives), but did after that without issue. But watching live data from the TCM, I was getting absolutely no Vehicle Speed and the Transmission OSS (Output Shaft Speed) was not registering either. I *think* that in the absence of the VSS output (per code above) the ECM may pull from the ABS data to give vehicle speed? Maybe?

So.......looks like I'm down to this one thing to troubleshoot.

Speedometer bouncing up and down

I have a 2009 Buick lucerne cxl special edition. Lately when driving at a steady speed after being warmed up (20/30 mins) the speedometer bounces up and down and also the acceleration increases and decreases accordingly. Paid $500 to the dealership and they claimed to have replaced the ipc but I...

2007LucerneCXL said:
Here's a older post on a speedometer issue

Speedometer bouncing up and down

I have a 2009 Buick lucerne cxl special edition. Lately when driving at a steady speed after being warmed up (20/30 mins) the speedometer bounces up and down and also the acceleration increases and decreases accordingly. Paid $500 to the dealership and they claimed to have replaced the ipc but I...

I am going to sheepishly admit that I don't remember plugging the VSS back in after replacing everything. I'm going to try to get out there and check before snowmageddon hits, but I have pilot ground school in the morning, a 3 hour window, then I need to run to work for a short spell.
______________________________

As you mentioned it may be that "are you kidding me moment", previous work done or other items as in the older post. Getting snow here tomorrow afternoon so a good day for inside projects like rearrange the sox drawer and because of the stay at home it's number 6 or 7th time kind of lost count lol.

Problem solved. This was staring me in the face when I popped the wheel off.

Yes it's dirty and nasty. The previous motor leaked like a sieve.

Drove it and all is well now. Couple of different ventures out with shutting everything off in between. No problems noted. Finally. Gonna leave it at my buddies barn for the time being since we're forecasted for a snowstorm tonight. Once that's past, I'll bring the car home, get it registered, and start looking for paint. Which is probably going to be Maaco as I found a good spot of deep rust at the top rear of the passenger front wheel well today while I was in there. It's a 3-5 year car given it's going to be stored outside and see central PA weather (and winters) with my mother in law, so I don't want her spending too much on the paint given it's got a finite lifetime.

Seen some where inside the engine bay at the top of the wheel well is an area that can start also. Remove the plastic wells and it will be center at the top, engine bay top center by the brace on the fender well look for a brown tint or stain.

Well, the weather finally broke so I brought the car home last Saturday and just registered it today. Drove home without issue, no lights, no indications, just ran fine. Kind of lazy going into OD at about 45 mph is the only thing I noticed and it may be just normal. 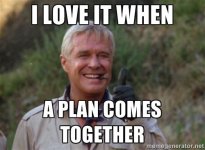 TT99C5 said:
Well, the weather finally broke so I brought the car home last Saturday and just registered it today. Drove home without issue, no lights, no indications, just ran fine. Kind of lazy going into OD at about 45 mph is the only thing I noticed and it may be just normal.

I had great transmission improvements after switching to Amsoil.

I'm not sure if it's normal and I'm just not used to it or if it's a potential issue. Just hangs longer in the last gear before going into OD than I'm used to. My DSG in my TDI Passat is snappy.

Got a leaky tire. Actually it needs tires, it'll be getting a PA inspection and there's some dry rot on a couple of them. Fortunately I can get a set of Michelin Primacy Touring A/S for $122/per tire thanks to my work. Anyway, the leak is courtesy of the typical chrome peeling issue. They're corroded bad. Plan is to strip and paint each wheel one by one, then have the bead areas ground down and cleaned when the new tires go on.

Maybe check with the DTS owners if that's normal for the NS and transmission, then again comparing it to a vehicle that may be more responsive it's difficult. I guess watching the tach on shift points to see if it's noticeable or if it's more around town vs highway entrance speeds. Hopefully it's part of the luxury ride programing and it's supposed to that way.
______________________________

2007LucerneCXL said:
Maybe check with the DTS owners if that's normal for the NS and transmission, then again comparing it to a vehicle that may be more responsive it's difficult. I guess watching the tach on shift points to see if it's noticeable or if it's more around town vs highway entrance speeds. Hopefully it's part of the luxury ride programing and it's supposed to that way.
Click to expand...


It very well may be. Thinking back to 2005 I had a 2000 Lincoln LS V8 that was REAL sluggish when shifting while cruising around part throttle..........programmed that way. Very similar to this actually.

I can say there's a difference, not in a bad way, but being a little OCD on my vehicles between the Lesabre / Lucerne both 3.8 and eventually got use to the felling of the two on there respective programing. Now compared to the Suburban which I can say feels almost neck snapping to the Buicks LOL.

Well, drove it to work this morning. Man it's a quiet comfy ride with just a little V8 burble going down the road.

Left front TPMS dropped out, which wasn't a surprise. It took a LONG time to come online when I brought the car home. Probably due for sensors.

Wiper washers didn't want to come on either.......which I'll look into as I had to get out and scrape the windshield.

Other than that.......drove like a champ. Getting a paint quote today on the way home.

Had a TPMS that went MIA subzero day and then reappeared later that same day. But it happend again about 4 months later, replaced all 4 TPMS as I assumed they were near the end of life.

Window washer pump is another PITA design so if you can find it's something else that is the problem it could be a happy issue. There was a recall on the windshield washer heater and eventually GM yanked everything out just a FYI if you notice something that doesn't make sense in the engine bay passenger side harness.
______________________________

Yep, I had noticed the cut off and taped harness. Found out after some digging what that was about.

Should be able to check the washer pump later today. Hoping it's just empty. Stranger things have happened.

There is a direct fit aftermarket heater unit that doesn't set the car on fire but honestly never seen the need in the first place.

Some dealers did a clean removal and others did a slash and burn which mine looked like, I also needed to find out what the mess was. I just stripped it back to the bare minimums, sealed it up and tucked it out of way so it's not visible. The wiper hoses where also just sort of left loose as if someone was going to finish the job after lunch but I guess they went home instead LOL.

Front Left TPMS came back on line today. Going to replace all four. MIL gave ok for me to get a set of Michelin Primacy AS tires through work (CHEAP.......$480 for the 245/50-18 set, perk of the job I do), so I'm going to snag a set of sensors. Plan is to probably jackstand the car, have all the tires dismounted, DIY refinish the wheels, then new tires mounted. That, or have the new ones mounted, then finish with the tires on. Probably latter, will keep the car mobile.

Tossed a CEL on the way home, of course. P0411 this time (and a P0520 for the Oil Pressure Switch, but it's not a MIL setter and it's not affecting anything.....intermittent also as it wouldn't clear then after a couple of starts it did clear). Not sure why the P0411 is showing up now. The car has been started and run plenty. It was cold this morning though.........and everything seems to be functional with the Secondary AIR system.

But the bad news. Maaco guy scoffed me out of the shop, said it was going to be $3K or more to paint the car. Not sure how to proceed now. I just want it to be presentable, and I've already decided if it's going to be $2K or more then my MIL can pay for the tires and I'll give her the car so she can get it painted and be happy with it.

Yeah, paint work has gotten outrageous. And I love the way Maaco advertises a $249 paint job but that's just to shoot the paint, nothing else. Still, any way you slice it, your MIL is getting a heck of a deal on the car. and you've literally been over every inch of it.
Share:
Facebook Twitter Reddit Pinterest Tumblr WhatsApp Email Share Link